After all, if you are South Asian you live your life in the public eye as a stereotype. As a doctor or a software engineer. A cabdriver or an abused domestic worker. Or a terrorist.

Bobby is no terrorist. He is a politician. He is the Governor of the State of Louisiana. And he’s running for President.

That is why Bobby is white. That is why he can’t be brown. No way, no how. Think about it. When was the last time America had a brown president?

There have been a few times—as in, a few times every day when he passes a reflection of himself—when the thought has crossed Bobby’s mind that he might, really, when all is said and done, still be brown. Bobby doesn’t like that. He doesn’t like the unwelcome intimation of his possible brownness trudging wearily across the desert of his mind. Like some undocumented migrant worker crossing into Arizona from Mexico.

It’s exhausting for Bobby. Thinking about being a South Asian in America in 2015. Getting people to take you seriously as a politician because—no, make that, if—you are brown. Exhausting. Even though you were born here. And have a certificate to prove it. Exhausting.

Bobby doesn’t like being exhausted—so much easier to be white!

No, Bobby can’t be brown. It just won’t do. Bobby is not a doctor or a software engineer. Or a cabdriver or an abused domestic worker. Or a terrorist. He is a politician. The two-time Governor of Louisiana. And he is running for President. He can’t be brown—it’s just too hard being a brown politician. That is why he is white, so white. See his portrait, if you don’t believe Bobby: 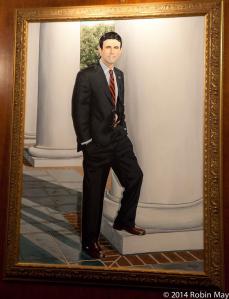 Bobby Jindal is so white his first act as President would be to deport his own father for being brown.